In the next few weeks, your wiki will be migrated to a Fandom.com domain. Learn more here.

Chests are storage items that can be used, once unlocked, by the player to keep their items and free inventory space or to be used as a mechanism where the contents inside automatically load into crafting stations such as the foundry. Chests contain a random assortment of potions, metal bars, rings, necklaces, seals or crystals. All chests can currently store up to 32 items in a 4x8 grid and occupy 2x2 tiles. 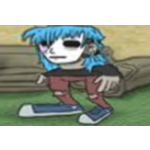