Chloridians are NPC's that can be rescued as part of a Quest from Underground Prisons and can be assigned to different jobs.

Obtaining: Butchers guard the Chloridians in Prisons that can be found underground, though they don't need to be killed in order to rescue the Chloridians. To 'rescue' a Chloridian, break its cage and they will start running roughly half a screen and then teleport. Rescued Chloridians magically appear back on the surface next to the Quest giver. They can be killed on their way and also, you can get Chloridian Essences after rescuing them. 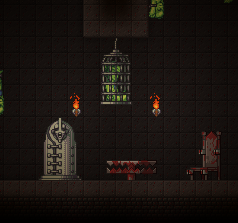 Jobs can be switched by you at any time by selecting "Forget Job". Chloridian Essence obtained from rescuing chloridians are necessary to craft the Chef's Cauldron,Smith's Anvils and Wizard's Table. It is possible to send chloridians back to the spawn point by selecting "Return to Crystal".