Pets can be referred to player equipable items or monsters caught in soul gems. They provide defense (absorving damage that may be incoming at the player, serving as a tank/shield) or attack, depending on the command given by the Flute of taming.

When a pet gets to 0 health, it will go back into their soul gem and will passively recover health, as long as it stays in the player's inventory long enough. KO'd (defeated pets) will only be able to be summoned again when they reach their full health.

To prevent waiting so much, the player can heal a summoned pet with the healing spell. You can check if they're available to use by a red asterisk(*) indicating it's ready, or a black * when it's not (KO'd). Pets have a stamina bar, however it is only used when the pet is tranfered into a seal and will be consumed upon attacking or flying, depending on the monster.

The player can only have a single summoned pet, but it can be accompanied by equipable pets, listed below, who provide different effects.

By capturing two of the same rarity monster, the player can breed monsters and create eggs - allowing to make the perfect pet by checking their stats with the monster analyzer without needing to level them up completely before realizing they don't have good traits. 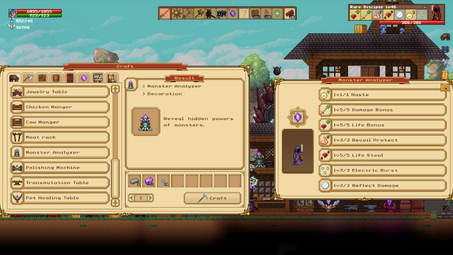 Showcase of the crafting recipe for the monster analyzer, visible in the middle, as well as all the stats of a pet Disciple. 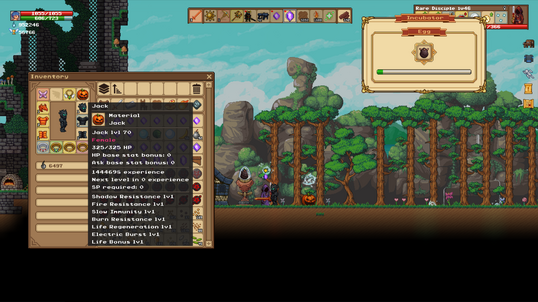