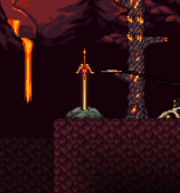 Phoenix Sword in it's pedestal prior to being mined up.

The Phoenix Sword is a powerful weapon that can be obtained almost as soon as you enter the underworld. It is found in a stone on the left side in the underworld, when you break it with a pickaxe it will drop the Phoenix Sword. It can either be used as a sword or placed in your pet slot to summon the Phenix. The Phenix, like captured enemies can level up when used, and upon killing an enemy it will drop exp instead of souls. It should be noted that as the Phenix also inflicts burning that if the enemy died by the burning effect instead of the Phenix's actual attack it will still drop souls.